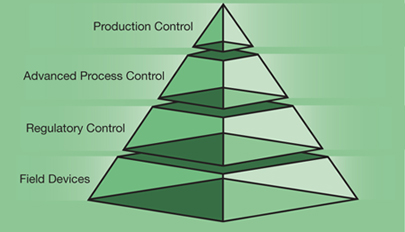 Process control can be represented as a hierarchy (Figure 1). The base of the structure is comprised of field devices such as sensors, transmitters, actuators, and valves that measure process variables and implement control actions. Next are regulatory controllers, which keep values measured by field devices, such as pressure, temperature, and flowrate, within specified limits. While regulatory controls tackle each variable individually, the advanced process control (APC) layer evaluates a set of variables, and considers how each one relates to the performance of an entire process unit. However, running a single unit at its local optimum is not necessarily the best strategy for achieving overall profitability of the facility. This is where the production control layer steps in to manage the individual units’ APCs in concert to accomplish plantwide optimization.

From field devices to production control, each layer depends on the previous layer in the hierarchy. The control performance of an individual layer directly affects the stability of the process, the quality of the product, and the costs associated with making the product. This article describes the hierarchical structure in more detail, and explains how model predictive control (MPC) fits into the APC process control layer.

The basic building block of any control system is the regulatory control loop, which consists of three essential pieces:

Feedback control. In feedback control, the controller compares the measured control variable to its setpoint, and computes a compensating move based on the deviation between the actual (CV) and the desired (SP) values. Think about feedback control — only responding to an error after it happens — like driving while looking in the rearview mirror; only after the car is in the ditch can a correction be made to get back on the road again.

Feedforward control. In addition to monitoring the CV, the controller measures a disturbance variable (DV), such as a change in load, and tries to predict the effect this change will have on the CV. This requires prior knowledge of the process response patterns. Unlike feedback control, which compensates for errors after they occur, feedforward control aims to combine feedback with another process signal to minimize errors and compensate as they happen.